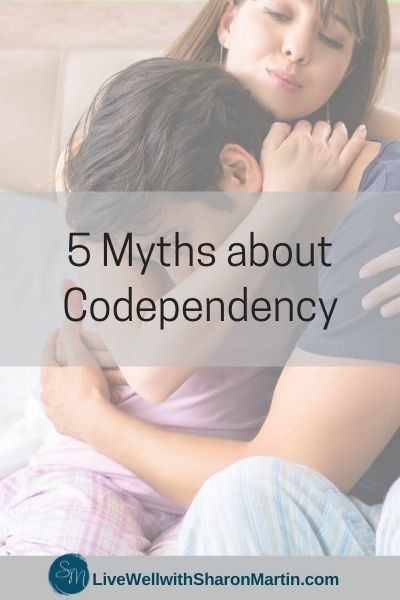 Codependency is a confusing term. And regardless of whether you like the term or not, it’s become a popular way to talk about a group of traits and inter-personal relationship dynamics that are usually the result of childhood trauma (such as growing up in a dysfunctional family) or generational trauma.

Even when you read through a list of codependent traits like this one, you may still be confused about what codependency is and whether you’re codependent. So, let’s dispel five common myths about codependency.

Myth #1 Anyone who helps others is being codependent.

People with codependent traits do spend a lot of time taking care of others, but that alone doesn’t make a person codependent. For example, buying groceries for your elderly neighbor during a pandemic or babysitting your brother’s kids while he goes on a job interview doesn’t mean you’re codependent.

Codependent caretaking tends to enable dysfunctional behavior, be excessive, and is sometimes unwanted.

People with codependent traits can put so much time and energy into taking care of others that they neglect their own needs. Their strong desire to help also serves as a way to feel needed and important; it’s central to their identity. Codependents don’t feel very good about themselves and caretaking is a way to feel valued and useful, which is why they feel compelled to do it even when it causes problems for them or others.

Codependents have a hard time saying “no” (or feel guilty when they do). So, they become exhausted and resentful from constantly giving and doing. They also tend to do things for others out of obligation or out of fear of being judged, rejected, or criticized.

Codependent caretaking can also involve enabling and trying to control and change people. When we help others avoid the negative consequences of their actions, we enable them to continue behaving in hurtful or dysfunctional ways. This isn’t really helping them. Instead, we’re trying to manage our own discomfort, anxiety, and feelings of helplessness.

In contrast, non-codependent caretaking has boundaries and is balanced with self-care. It isn’t done compulsively to validate your worth or quiet your anxiety. It’s respectful and not forced on people who don’t want to change or don’t want the particular solution you’re set on.


Myth #2 Codependency only happens in families with an alcoholic family member.

Codependency doesn’t only develop in families dealing with addiction. The concept of codependency originated from trying to understand the dynamics of women married to alcoholics, but as our understanding has grown over the years, we’ve realized that codependency can develop in a wide array of family situations – between spouses, parents and children, siblings, and even among friends.

People with codependent traits often grew up in families with addiction, untreated mental illness, abuse, or neglect. But there are still others with codependent traits who describe growing up without obvious signs of dysfunction. However, their families often have exceptionally high standards, not be attentive to your emotional needs, emphasize self-sacrifice over self-care, or be enmeshed (not encouraging children to develop a strong, independent self with differing beliefs, feelings, ideas, etc.), which may contribute to codependency. Codependency can also be passed down generationally.

Myth #3 You’re either codependent or you’re not.

Codependency isn’t your fault. Sometimes people with codependent traits think “I should be able to make my spouse (or child or parent) stop drinking. If I was stronger (or smarter or prettier), s/he’d stop.” This is flawed thinking that leaves you blaming yourself and trying to control the uncontrollable.

If you choose to make changes, you won’t always have codependent traits. You can learn to think and behave differently. It can be a lengthy process, but people can change even long-standing patterns. I believe that acknowledging your codependent traits is the place to begin. As I said, I know that some people don’t like the term codependency and feel it’s blaming, but I think it can be empowering if you choose to make it so. When you recognize that some of your thoughts and behaviors are making you unhappy, unfulfilled, or unhealthy, you can begin to change them. You can start prioritizing your needs, discovering who you and what you like, and you can untangle yourself from unhealthy relationships.

Therapy, self-help books, and support groups such as Al-Anon and Codependent’s Anonymous are helpful recovery tools for many codependents.

The Difference Between Codependency and Caring

What is Enabling and What Can We Do About It? (video)

The Difference between Having Needs and Being Needy 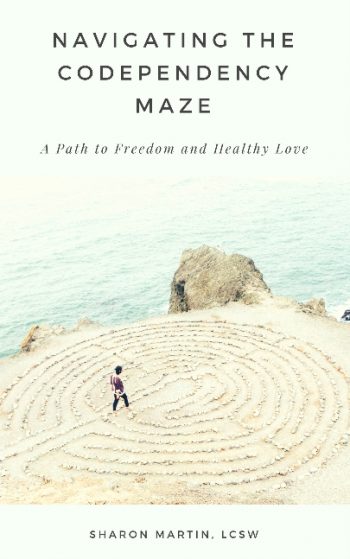 Free yourself from codependent patterns

Navigating the Codependency Maze provides concrete exercises to help you manage anxiety, detach with love, break through denial, practice healthy communication, and end codependent thinking. It was written by Sharon Martin, a psychotherapist with over 20 years of experience helping people overcome codependency, people-pleasing and perfectionism and find their way back to themselves. For more info and to view sample pages, click HERE.