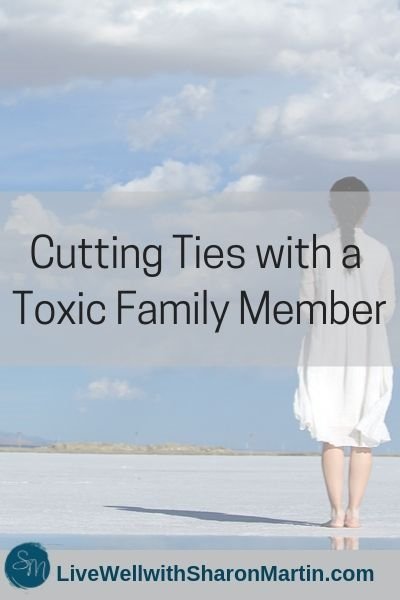 It’s never easy to cut someone out of your life. And when it comes to family, it’s especially hard to accept that a family member is creating so much stress, anxiety, and pain that you can’t continue to have a relationship with them.

This post is for all of you who are struggling to decide whether to continue a relationship with a difficult or toxic family member. You’re repeatedly hurt by this person, have tried tirelessly to repair the relationship, feel frustrated that nothing seems to change (at least for very long), you don’t want to give up, but you don’t know how to move forward in a way that respects and nurtures yourself.

When is it appropriate to cut ties with a family member?

This is a tough question and I don’t have a one-size-fits-all answer. Consider the list of “toxic” behaviors below and how often you experience these issues with the family member in question.

Toxic people disrupt your life and other relationships with behaviors such as these:

People can change, but toxic people rarely do. They lack self-awareness and don’t take responsibility for their actions. And since they don’t see how their behavior hurts you, they refuse to change. Instead, they blame you and expect you to cater to their demands.

I think we can all agree that no one deserves to be abused. So, why do we give our family members a free pass? Why do we think we should tolerate such hurtful behavior from them?

It sucks to have to choose between yourself and your family members. It really does. But this is the reality. Remaining in a relationship with a toxic person is potentially harmful to your emotional and physical health and relationships (and may negatively affect your spouse and children, too).

The bottom line is that for many people, the only way to heal is to remove yourself from the abusive relationship. How can you heal if you continue to be abused? 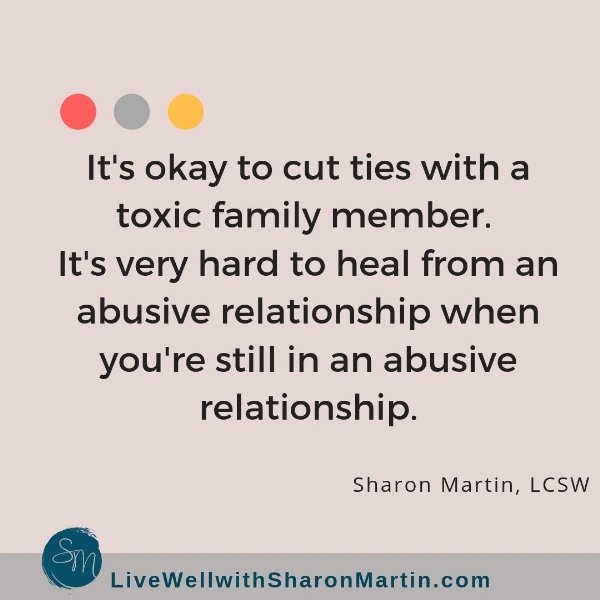 If you’re not ready to cut ties

It’s okay to not be ready. You shouldn’t be pressured into making a decision. Most people who cut ties, do so as the last resort. They come to this decision gradually over years of fits and starts. They cut off ties and then reconnect. They set boundaries and make themselves less available. Things calm down and they feel better, only to have problems escalate again. This is common!

There is no right way to deal with a toxic family member. Only you can decide how much contact is right for you. And you will know if and when you need to walk away in order to save yourself. Just know that it’s okay to end a toxic relationship – even with a family member.

2 thoughts on “Cutting Ties with Toxic Family Members: An Act of Self-Care”