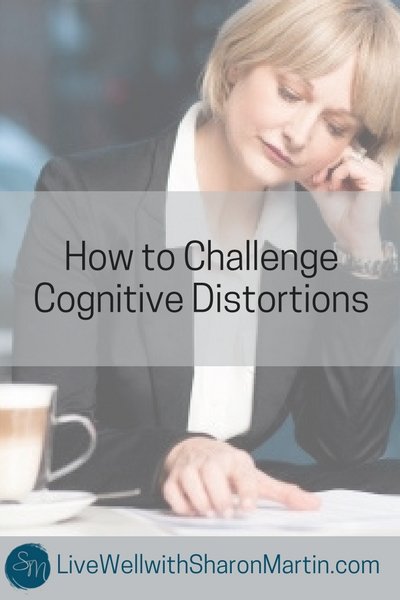 What is Cognitive Behavioral Therapy?

The key components of cognitive behavioral therapy (CBT) are to 1) identify your cognitive distortions, 2) challenge the distorted thoughts, and 3) replace cognitive distortions (aka thinking errors) with more accurate thoughts, beliefs, and self-talk. CBT is based on the understanding that your thoughts affect your feelings and behavior and your behaviors also affect your feelings and thoughts. So, when you change your thoughts, you will interrupt the cycle and the result will be feeling differently and acting differently.

What are Cognitive Distortions?

Cognitive distortions are also called negative automatic thoughts because they happen automatically with little awareness that they are inaccurate and skewed toward the negative. Once you are aware of your cognitive distortions, you can begin to challenge them to find out if they are really accurate or whether you’ve focused on the negative, overgeneralized, or blamed yourself.

Sometimes cognitive distortions are the result of assumptions. When we don’t have all of the information, we have a tendency to fill in the gaps and these assumptions are often negative.

Nicole notices her boyfriend, Will, keeping his phone on him at all times. He takes it into the bathroom and never leaves it unattended. Nicole worries that Will’s talking to another woman and feels angry. She goes through Will’s wallet while he’s sleeping. She snaps at him whenever he checks his phone.

Chloe’s been unemployed for five months. She’s been on several interviews, but hasn’t gotten any job offers. When she doesn’t get a call back, she thinks she’ll never get hired and falls into a depression and stays in bed all day. She finds fault with everything she did during the interview and blames herself.

Nicole and Chloe have focused on the negative, made assumptions, and distorted reality. That resulted in difficult emotions (anger and depression) and destructive behaviors (snooping, yelling, staying in bed).  They can use questions like those below to help challenge their cognitive distortions and check for thinking errors.

You can counter your assumptions and distortions by making a list of all the other possible explanations for what’s going on. This can be hard, because those cognitive distortions are deeply embedded in our thinking. Try to have an open mind and consider all possibilities. Simply doing this exercise can remind you that there are many, many other possible explanations beyond what seems like a fact to you.

The assumption that he’s being unfaithful is certainly easy and common. You may think that Nicole’s alternate explanations are unlikely, but at this point she doesn’t know what the truth is. It’s helpful to consider all possible explanations and, if possible, check to see if there’s evidence to support the original belief.

I hope you’ll give these CBT techniques a try.

8 thoughts on “How to Challenge Cognitive Distortions”